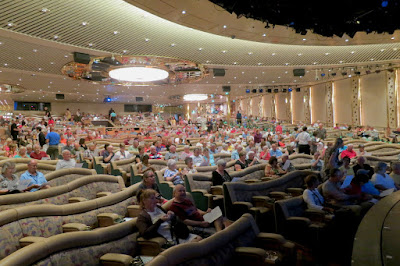 Day 9 at 09:45 am there was a Consecutive Dubai Cruiser information meeting by Guest Service Manager Jorge Pedrosa in That's Entertainment Theater .
A total of the current 870 guest are continuing the cruise from Dubai to Barcelona - probably the biggest number of consecutive guests ever?
In order to maximize the time for tours in Dubai, Guest services has negotiated immigration and boarding procedures for consecutive cruisers with the Dubai Authorities.
Also free  'Legend of the Seas' shuttle buses has been organized for Dubai Mall.

Very well thought arrangement which hopefully will reduce the queues when leaving/arriving the ship in Dubai.
At this cruise the sea has been very calm so far - this afternoon we passed an area with more stormy weather and rough sea - there was a 'Crown & Ancher Society & Suites Party' arranged at 5:15 pm at the 'Spa Relaxation Deck.' Due to the rough sea the event was cancelled. However the motion of the ship was not that bad.
Formal night and 'Legend of the Seas Parade of Flags' in Centrum at 8 pm.
at March 11, 2017