During the morning we sailed through the Straits of Malacca in Malaysia's west coast at starboard and Sumatra at port side. We sat on our balcony in the sun and read. 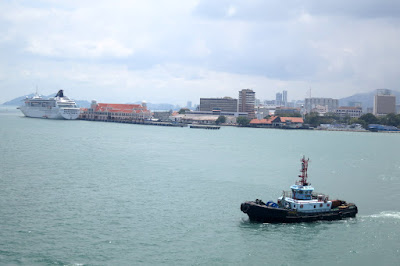 Our first stop was Penang island in Malaysia. We docked 3:00 pm at Swettenham Pier with a nice terminal in George Town. This is close to Beach Street, Weld Quay, Clock Tower and Esplanade.

The old town is very walk able and easy accessible from the Cruise Pier.
The oldest portion of the city center has been designated by UNESCO as a World Heritage Site since 2008.  Recognized as having a 'unique architectural and cultural towns cape without parallel anywhere in East and Southeast Asia'.
At 14pm we went ashore. Temperature was 29 C (84F)  - fortunately it was cloudy. We had planned a walk round in George Town, to see the main attraction and soaking up the atmosphere.
Not far from the port lay the remains to an old fort - the wall with cannons facing the sea. Past the town hall and through the old town, In the city there are many temples - the first one we visited was a Buddhist temple. Here was good time in incense stick end. When the temples were decorated with lights and flowers.
In the main street there were bazaars and street kitchens, and much tribulation.
The tour ended at Penang Jetty, a city built on stilts in the water. Here we also got the opportunity to see how local lived. At 8:00 pm we were back on the ship - very tired.
More information about George Town Sights and Shopping.

Here are 24 pictures from our Penang visit.
And three videos:

Legend of the Seas were ready to set sail at 11 pm. We were sitting on our balcony with a glass of wine to follow the exit from George Town and the challenges the pilot boat had to pick up the pilot from the ship when pilot boat was hit by a wave.